Andy Carroll appeared to have put his Dubai stag-do woes behind him as he arrived at his and Billi Mucklow’s wedding venue ahead of their nuptials on Sunday.

The former Newcastle and Liverpool striker, 33, couldn’t have been more relaxed as he arrived at a Hampshire hotel to prepare for the big day.

The footballer appears to have been forgiven by bride-to-be, 34, after passing out in bed with two women during his stag-do in Dubai. 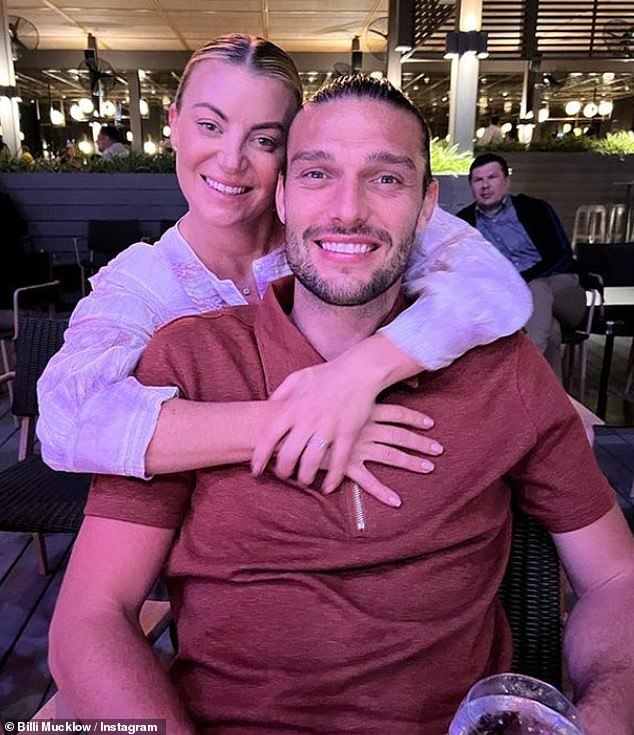 Nuptials: Andy Carroll appeared to have put his Dubai stag do woes behind him as he chilled out ahead of his wedding to Billi Mucklow on Sunday

The couple arrived together at the luxury five-star hotel in Hampshire on Saturday, where they will tie the knot tomorrow.

They looked relaxed as they dropped their Porsche 4×4 car off at valet parking before heading off to separate rooms for the night before their wedding.

Andy quickly made the most of the facilities at their secluded country retreat as he headed off to the hotel’s indoor family swimming pool, according to onlookers.

He was seen having a splashing time with a couple of pals as he relaxed ahead of his impending nuptials. 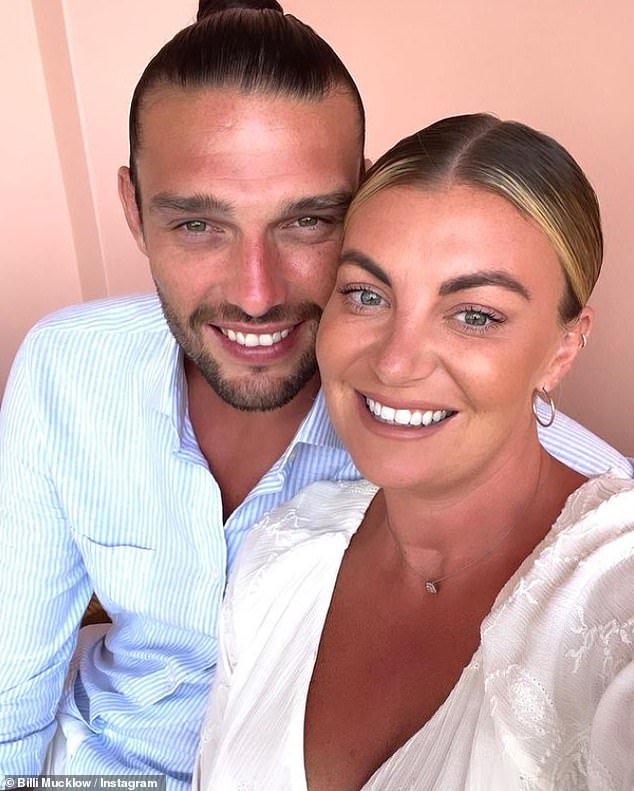 Going ahead: The couple (pictured) arrived together at the luxury five-star hotel in Hampshire on Saturday, where they will tie the knot tomorrow

An onlooker said: ‘He looked very chilled out and relaxed. He certainly doesn’t seem to be having any last minute nerves or anything like that.

‘Mr Carroll and his guests all seem to be enjoying themselves.’

Staff were busy preparing for tomorrow’s big event with brightly coloured bouquets of flowers being lined up ready for the celebration.

Up to 200 guests are expected to attend the lavish event with the hotel closed to visitors for the weekend. 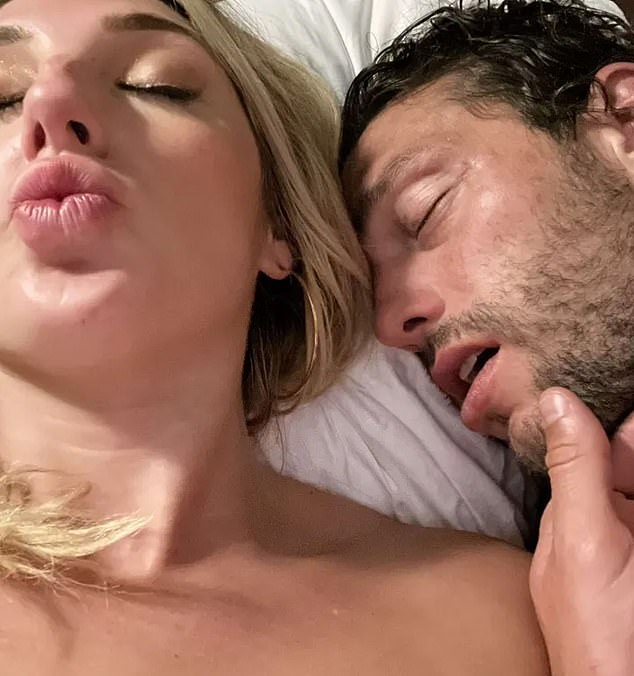 Antics: It comes after Andy, 33, was pictured asleep next to a blonde barmaid and it was revealed he had also slept beside alongside a second woman on his Dubai stag-do

Organisers promise to make the couple’s ‘dream wedding come to life’ with five elegant event rooms and a variety of ‘magical outdoor venues’ to help ‘celebrate the historic beauty and natural wonder’ of the 500-acre estate.

It comes after Andy is believed to have banned his groomsmen from making ‘three-in-a-bed’ jokes at his wedding to Billi after his stag-do antics.

The footballer, 33, is still set to tie the knot with the former TOWIE star on Sunday despite Billi being seen without her £200,000 engagement ring on earlier this week.

She was said to be ‘struggling’ over their impending wedding day after Andy was pictured asleep next to a blonde barmaid, and it was revealed he had also slept beside alongside a second woman on his stag-do.

Ahead of his nuptials, Andy has reportedly banned his groomsmen from making ‘three-in-a-bed’ jokes or speaking of the raucous Dubai stag-do at all on the big day. 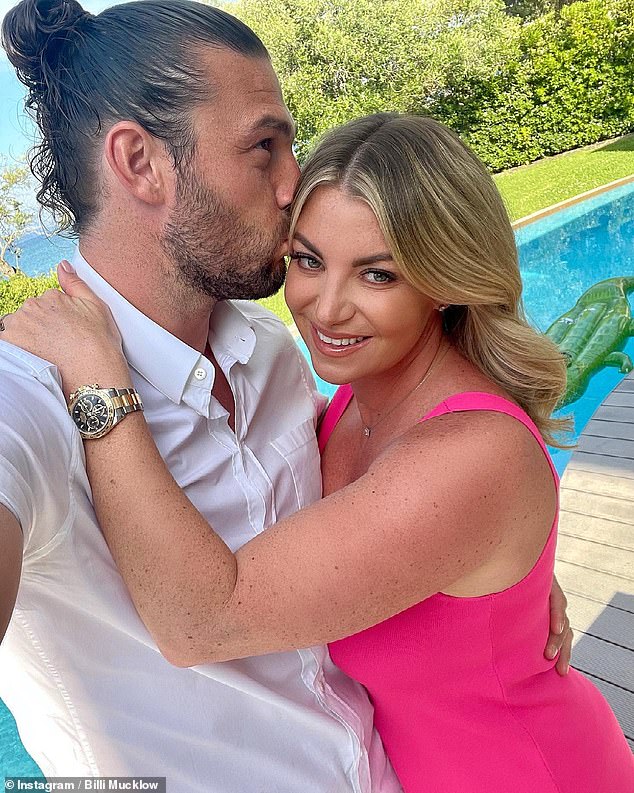 Silence: Meanwhile, Andy is believed to have banned his groomsmen from making ‘three-in-a-bed’ jokes at his wedding to Billi after his stag-do antics

‘Andy has warned his groomsmen that there are to be no jokes about Dubai, let alone any talk of the stag at the wedding,’ a source told The Sun.

‘Billi is still quietly fuming about everything that went on and she’s warned Andy that he should do everything not to ruin their big day.’

MailOnline has contacted Andy and Billi’s representatives for comment.

Earlier this week, Billi broke cover for the first time since the Dubai stag-do and was seen without her £200,000 engagement ring.

She was joined by her mother Paula, who has been at her side since the news of her husband-to-be’s holiday exploits broke last week, as she moved out of her £5million family home to live with her parents to do some ‘soul searching’.

The mother, who shares three children with Andy, kept a low-key figure in a black outfit and sunglasses as she stepped out following the scandal. 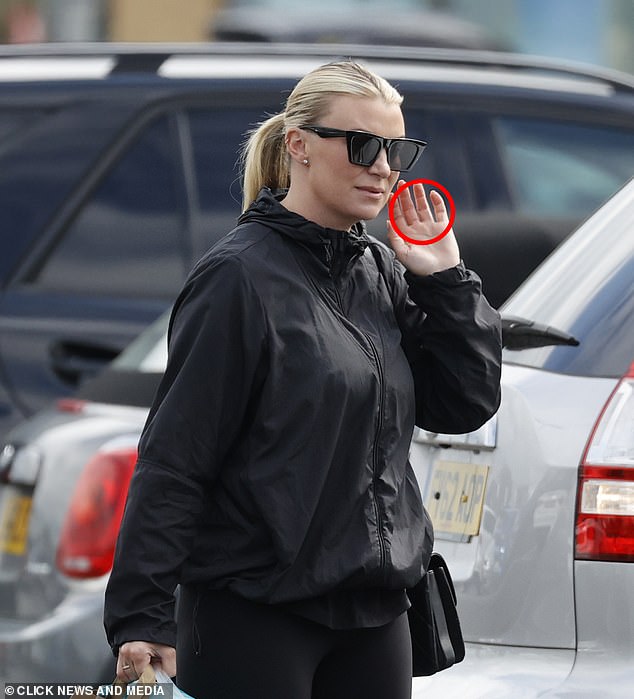 No ring: The footballer is set to tie the knot with the former TOWIE star, 34, on Sunday despite Billi being seen without her £200,000 engagement band on earlier this week

Billi, who normally sports a huge diamond ring on her wedding finger, was without the sparkler as she visited a Boots pharmacy near her home.

Glum-looking Billi wore her blonde hair swept back off her face and opted for a light coverage of make-up during their outing.

On Tuesday, devastated Billi told staff at the bridal store where she purchased her wedding dress that she ‘doesn’t want to get married’ but will tie the knot with Andy.

She revealed their nuptials this Sunday in Hampshire will go ahead as planned, conceding it’s too late to cancel with so many commitments in place including travel and accommodation arrangements for their 200 guests attending the lavish bash.

She received her wedding gown from London bridal shop Browns Bride after having it couriered on Tuesday following the footballer’s three-in-bed shame. 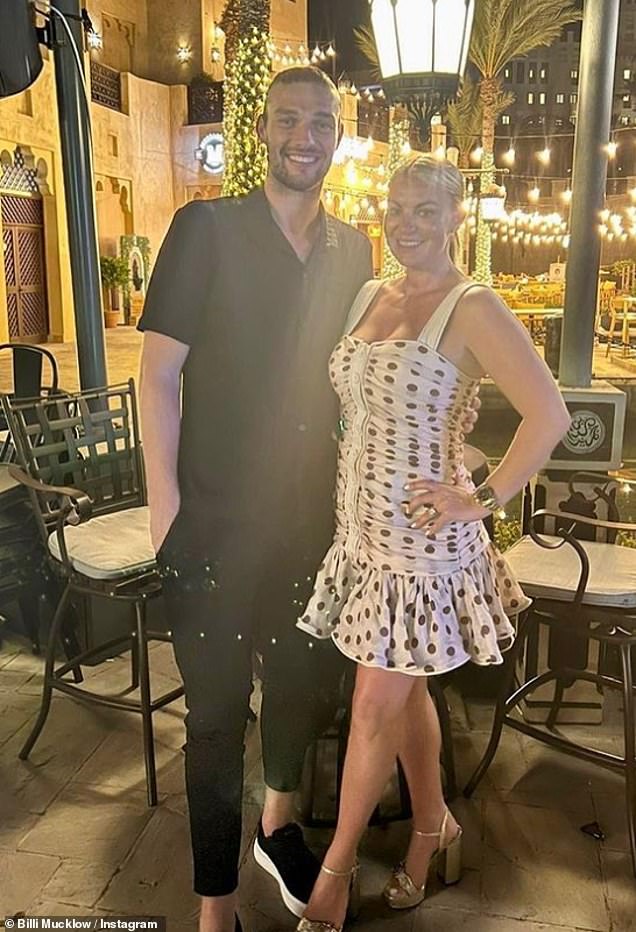 Nuptials: Billi revealed their wedding this Sunday in Hampshire will go ahead as planned, conceding it’s too late to cancel with so many commitments in place

MailOnline revealed last week that Billi branded her fiancé ‘an idiot’ after he was pictured in bed with bar manager Taylor Jane Wilkney during his stag do.

The couple had announced their engagement in November 2014, after Andy popped the question during a romantic mini-break in Rome, Italy.

Billi is now said to have replaced a WhatsApp profile picture of herself and her fiancé with a photo of just their children after his antics were made public.

It’s understood that Billi is demanding Andy ‘hand over everything’ in relation to the pictures before their wedding.

A friend said: ‘It’s the only way she can move on — however bad it is.’ 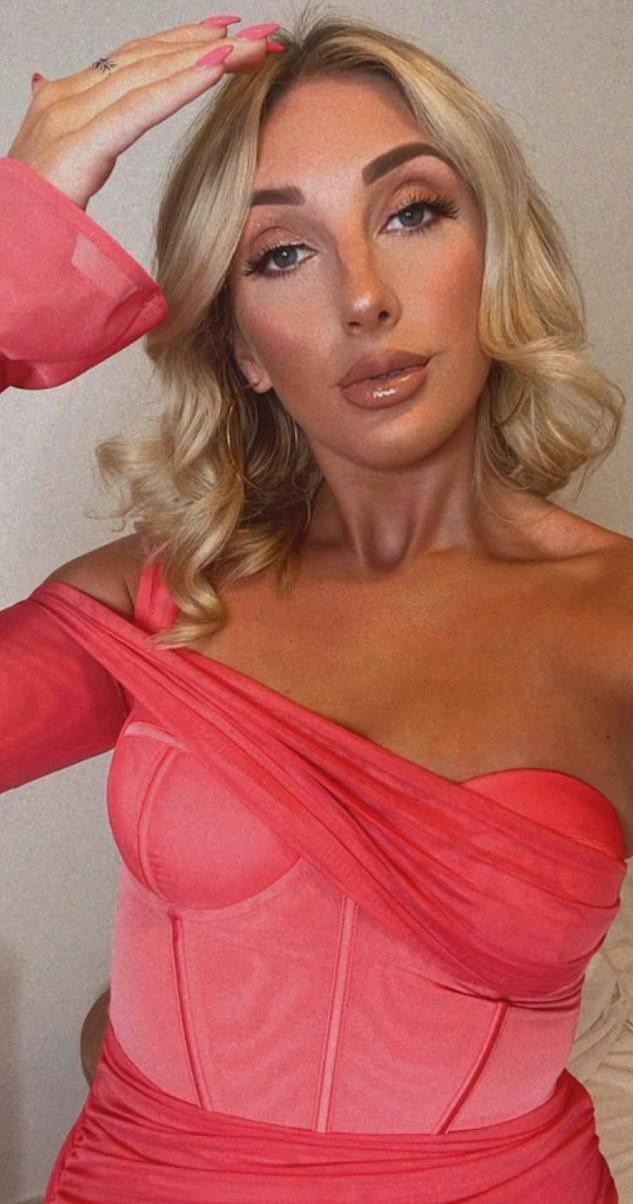 Partying: MailOnline revealed last week that Billi branded her fiancé ‘an idiot’ after he was pictured in bed with bar manager Taylor Jane Wilkney (pictured) during his stag do

Earlier this month, Billi and her pals jetted to Dubai for her hen-do, which was ‘gate-crashed’ by her fiancé after he arrived in the UAE towards the end of her girls’ trip.

The delighted wife-to-be shared a happy snap of the pair as they enjoyed dinner, while renaming her Hen Party a ‘STEN do’.

But just days later, Andy was pictured sleeping next to bar manager Taylor, which followed on from the ‘STEN’ celebrations.

Photographs showed the recently released West Brom forward passed out on a bed beside the 27-year-old bar manager.

Other snaps showed Taylor wearing the father-of-five’s personalised bathrobe with ‘Andy Carroll’ embroidered on the chest. 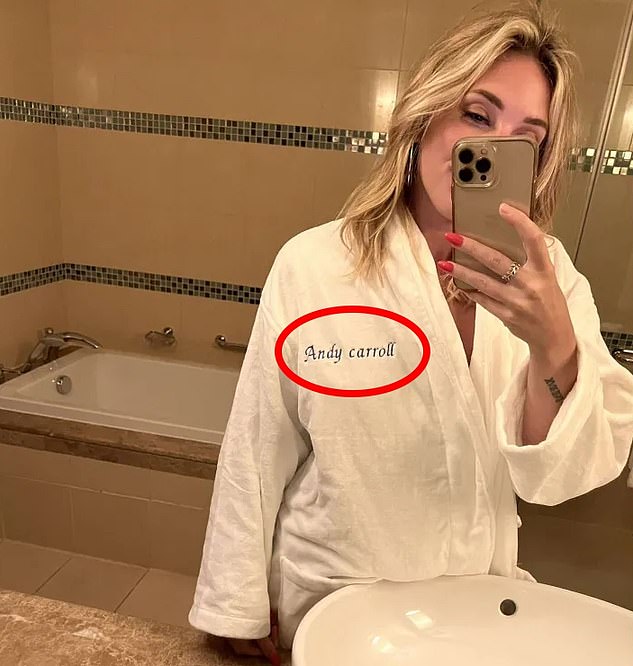 Taylor, who says the pictures were leaked on Snapchat after she sent them to her friends back in the UK, insists nothing sexual happened with the 6ft4in forward. ‘It was all just a bit of entirely innocent fun.’

Taylor detailed the boozy night with the West Bromwich striker and claimed that she and her pals were not told Andy was on his stag-do.

She told The Sun: ‘At no point did anyone mention it was a stag do, we were told it was a lads’ holiday, I didn’t know he was getting married.’

Taylor, who works in Dubai as a bar manager at a high-end hotel, described her time with Carroll as ‘really boozy’ and said the striker was ‘steaming drunk’.

Reflecting on the night, Taylor said they arrived at The Avenue Dubai, a nightclub in the Shangri-La Hotel, at around 1am and headed to the VIP area, where Andy had booked a table, before later heading back to Andy’s hotel for an after party.

She said they all had shots of Grey Goose vodka before Andy danced around with underwear on his head, while one of his friends fell off a chair and through a false wall.

‘I remember Andy dancing around with the waistband from a pair of Calvin Kleins on his head and the DJ kept giving him a shout-out,’ she added.

The wild bender saw Andy and his friends spend around £30,000, where Andy drunk at least 20 rounds of vodka, 10 glasses of sangria, and 10 shots of Jägermeister and Grey Goose vodka.

But Taylor insisted that the night was just ‘innocent fun’ and apologised to Andy’s fiancée Billi for the ‘mess’.

However friends of Billi told the paper the pictures were ’embarrassing’ so close to their wedding, which is set to take place in just two weeks after an eight year engagement. 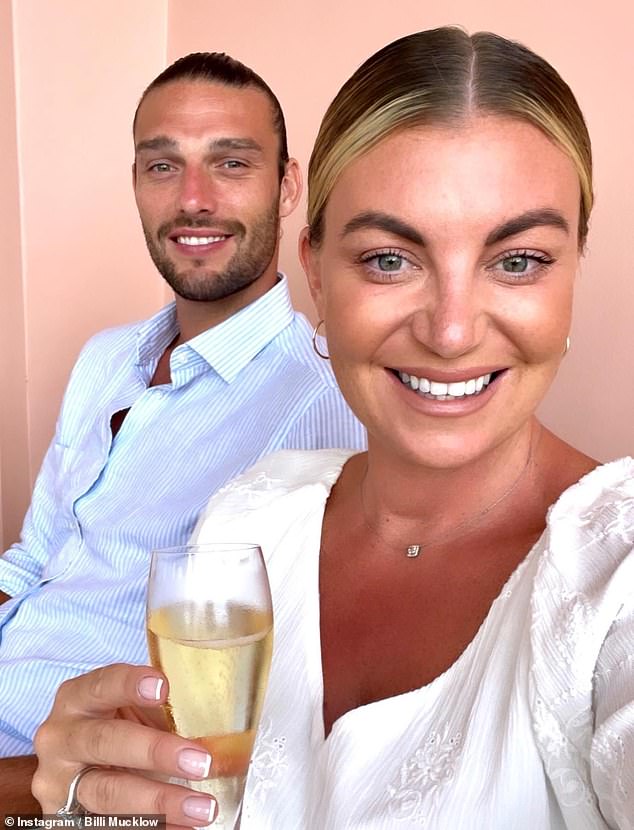 Romance: Billi started dating the Geordie footballer in the summer of 2013 but they kept their relationship under wraps until the following February. They got engaged in 2014

With his towering frame, Andy had already established himself as a talented striker for boyhood club Newcastle United before confirming his relationship with TV personality Billi in 2014.

She found fame on The Only Way Is Essex in 2011, but quit reality TV two years later to run a Bikram yoga studio in Essex.

Billi started dating the Geordie footballer in the summer of 2013 but they kept their relationship under wraps until the following February.

They welcomed the first of their two children together, son Arlo, now six, in June 2015, with the couple confirming the news on social media shortly afterwards.

A timeline of Andy and Billi’s ‘STEN do’

Wednesday, May 18: Billi and her friends travel to Heathrow to fly out to Dubai. As previously reported by MailOnline, Billi leaves without two of her hen party because one of her closest friends is deemed unfit to fly after consuming too much alcohol.

Sunday, May 22: Billi posts a number of images of her in Dubai on her Instagram, including one in a green top enjoying a drink from a cup with the words ‘Mrs Carroll’ on the side. Her and her hen party share a snap by the pool of them all wearing white shirts with the words ‘drunk in love’ written on the backs. Carroll, fresh from his release by West Bromwich Albion, arrives in Dubai with a group of around 15 friends, reportedly including Newcastle United defender Paul Dummett and goalkeeper Mark Gillespie.

Monday, May 23: Billi posts a photograph of her and her husband to be together in Dubai. ‘STEN – Hen Party Crasher @andytcarroll,’ Billi captioned the snap, showing her in a polkadot dress and him in a black shirt. She later shares images of herself at the airport, grabbing food before flying home to the UK. Photographs show Billi arriving at Heathrow on Monday.

Wednesday, May 23: Andy, who is staying at the £500-a-night Hotel Fairmont, parties at a club on Cove Beach with others including a hotel bar manager – Taylor Jane Wilkey. She later tells The Sun that after a ‘really boozy’ day, she and a female friend went back to his hotel. She takes photographs inside the hotel, which she says were sent back to friends in the UK and leaked. She tells The Sun that nothing happened between them, but friends close to Billi and Carroll describe the photographs as ’embarrassing’.