Inflation a concern for those getting married – The Lima News

CHICAGO — When Evan Cooperman and Rachel Ambrozewski got engaged in October 2019, in true Chicago style, the couple made no little plans: an elopement to a resort in Bali in June 2020, followed by a stateside wedding at the Michelin-starred, and now shuttered, Band of Bohemia.

But with the arrival of the COVID-19 pandemic in March 2020, just months after Cooperman’s proposal at a Halloween party, the frightening trajectory of the virus abruptly derailed the couple’s original wedding plans, forcing them to postpone their celebration for two years.

“It was almost like planning four weddings, so it’s been crazy,” said Ambrozewski, 36, and a researcher.

“Thankfully, everything was insured, so God willing, our wedding is June 18, with the theme of ‘Bali in Chicago,’ which is a nod to the original plan,” Ambrozewski said.

The couple, who were married before a judge at City Hall in July 2021, followed by a “micro-wedding” at Salvage One, will have their “big wedding” June 18 at NoMi Kitchen in the Park Hyatt Chicago, she said.

“Yes, plans can change, but our overall vision is being honored,” Ambrozewski said.

With most COVID-19 restrictions lifted in Chicago and much of the U.S., those who postponed their dream wedding celebrations, as well as a contingent of newly engaged couples, have led to a surge in demand for wedding-related businesses.

But while the wedding industry is welcoming the uptick in couples seeking caterers, florists and pastry chefs for wedding celebrations this year, soaring inflation rates and steep worker shortages are making the resurgence of business bittersweet.

Brisk said of the 32 weddings she had booked pre-pandemic, she had one cancellation, two “micro-weddings” and 29 weddings “that were rescheduled at least once.”

“People were postponing, first from July to September, and then they realized the further you put it off, the higher the odds were that it would happen,” Brisk said.

Brisk said in Chicago, the total tab for a formal wedding celebration with 150 guests can run around $80,000, but most wedding planners will try to help couples create an event that meets their personal tastes within a more modest budget.

Indeed, while Brisk said couples pre-pandemic typically spent around 45% of their budget on food and drinks, those costs have risen to at least 55% or more of total spending, with steep labor shortages finding some hotels and caterers “monumentally understaffed.”

“There is less, but still there is some room for negotiations as the food costs are increasing,” Brisk said. “The other big issue across the entire industry is labor — so much of the events, wedding, catering (and) lighting production staff found other careers and now work in other fields that are not weekends, and more of the 9-to-5 work.”

“You might be a caterer who typically books 10 to 15 events on a weekend, and now, you have to stop at six, because you just don’t have enough employees, and it’s not worth it to take the business and ruin your reputation, and maybe ruin someone’s night or wedding,” Brisk said.

Couples also need to be aware of supply-chain shortages. Brisk said she has heard of shortfalls of men’s suits — and said she is “all about ordering attire as early as possible across the board.”

To be sure, the pandemic’s impact on the wedding industry the past two years has been significant, with a 2021 survey of 468 wedding vendors finding most were able to service less than 25% of working dates in 2020, and 32% reporting an estimated financial loss of more than $50,000, according to the website for Zola, an online wedding registry, wedding planner and retailer.

This year’s outlook is more hopeful.

In a recent Zola survey of 3,309 couples planning 2022 celebrations, 68% of couples report inviting 100 or more people and two-thirds said they have increased their budgets since they started planning.

The survey also found couples being “super-specific” when it comes to their themes and wedding colors, as well as expanding their guest lists. They are “being really thoughtful when it comes to kids, plus-one′s, and how their relationships with friends and family have changed,” according to the website.

“One major trend we’re seeing is couples really want to personalize their experience, and the meaning and emotions around weddings seem to be heightened,” Zola spokeswoman Emily Forrest said.

“Everyone has been through so much, and couples are really thinking about what this day means for them, especially since this might be the first time they will be back together in person with all of their friends and family,” Forrest said.

While inflation has affected prices for some products and services, Forrest said even before the pandemic, an estimated two-thirds of couples end up going over their budgets for what she called “such an important event.”

Chicago bride Courtney Lee, who along with groom Alexander Garcia welcomed 130 guests to their April 9 wedding reception at The Rookery in Chicago, said getting engaged in December 2020, in the middle of the pandemic, added an extra layer of anxiety.

“We did get stressed out when Chicago implemented the vaccine mandate, and we thought we’d have to get vax card info from everyone, but other than that, it’s been fine,” Lee said.

Inflation caused some sticker shock when Lee was selecting her flowers and discovered the $1,000 the couple had budgeted was unrealistic, she said.

“Fortunately, we were able to adjust our budget, because the flowers ended up costing $4,000,” Lee said.

Jennifer Martin, a virtual stylist with Prix Fixe Party, said those tying the knot during the pandemic are not scaling back their expectations and instead are determined to host a party that will be equal parts wedding celebration and long-awaited reunion for family and friends.

“Now, along with people happy about everything opening back up, there is a lot of pressure to have a wedding that is Instagram and Pinterest worthy, and couples are looking for ways to get that look,” said Martin.

“Some will spare no cost or effort, while others who can’t afford it are finding a way by going heavy with the DIY.”

Martin has been busy helping couples across the U.S. — including Ambrozewski and Cooperman — plan their weddings with her remote services, which she said helps keep expenses down, especially given the impact of inflation and rising fuel costs.

“I am seeing some couples who really waited for a long time to get married, and are now feeling like, ‘Let’s do it! Budget? What budget?’” Martin said. “But the pandemic has not been friendly financially to everyone, and some couples are working with a smaller pocketbook. But they still want a wedding and to be married, which is what really matters.” 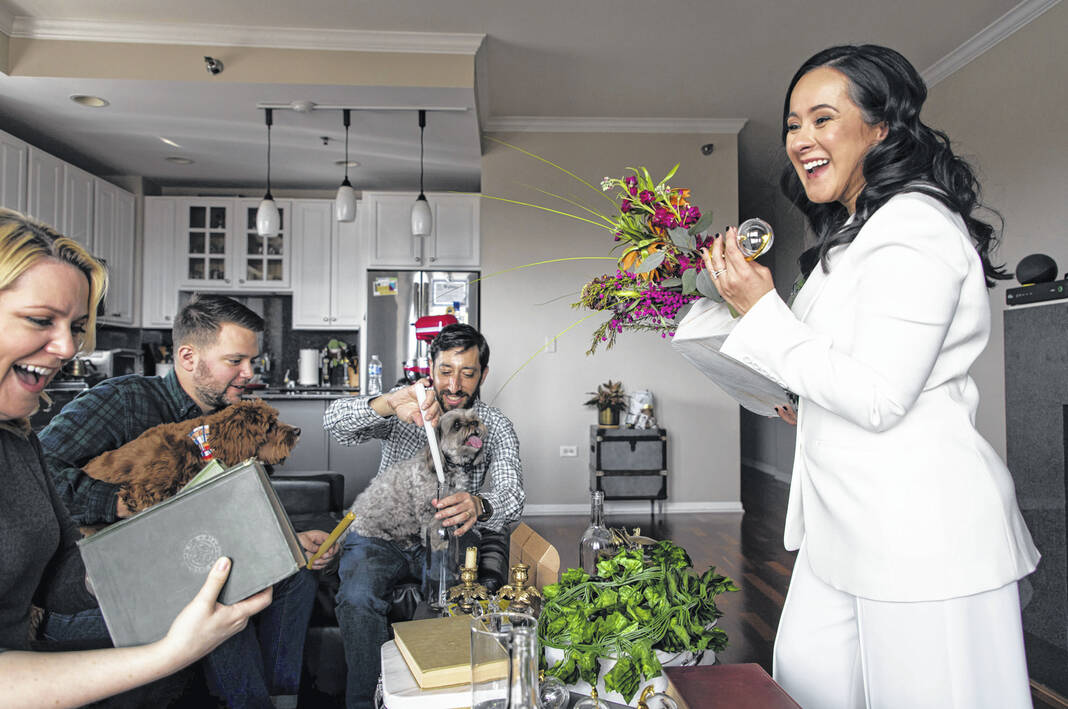 Rachel Ambrozewski, right, and Evan Cooperman, second from right, look over their planned decorations with bridesmaid Ryann Rase, left, and groomsman Chris Robinson at their Chicago home Sunday, April 10, 2022. The couple were forced to cancel their wedding plans multiple times during the pandemic and have rescheduled their celebration for June. 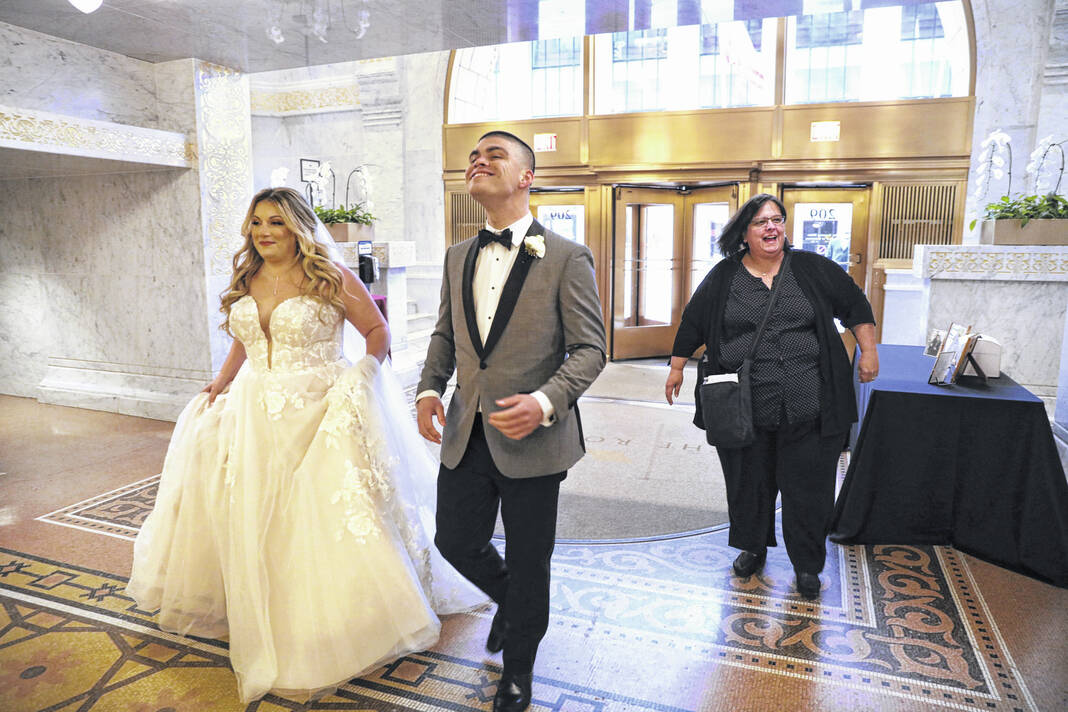 Bride and groom Courtney Lee and Alex Garcia wear smiles on their faces as their wedding planner Diane Brisk shows them the way to their wedding reception spot at the Rookery Building in downtown Chicago on Saturday, April 9, 2022.