She tied the knot to Jeremy Parisi in Italian port town Civitavecchia on July 30.

And now Kelly Brook has opened up about her fairytale wedding on her Heart radio show with Jason King.

The presenter, 42, detailed the special day, explaining how a thunderstorm had almost derailed the celebrations. 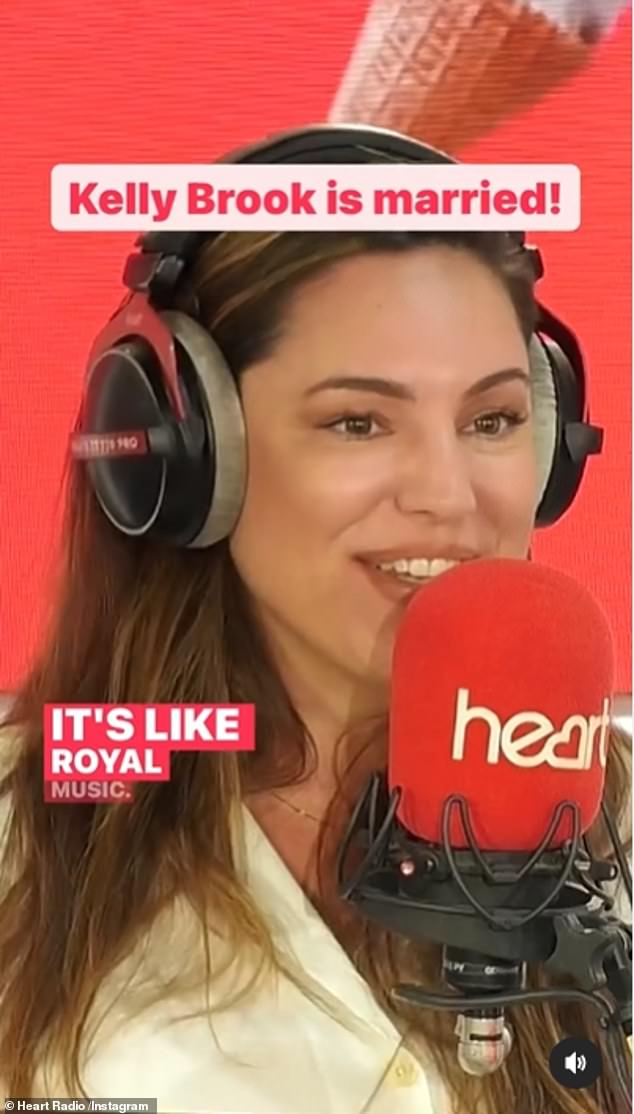 Tied the knot: Kelly Brook has opened up about her fairytale wedding on her Heart radio show with Jason King

The ceremony had originally been planned as an outdoor event in an area some 1,500 metres high, but an unexpected rainstorm prompted a last minute change of plans.

Consequently, the bride, groom and an assortment of friends and family members celebrated the ceremony within the walls of Torre di Cicero.

But Kelly explained she wouldn’t have changed a thing about her wedding and poked fun at the drama. 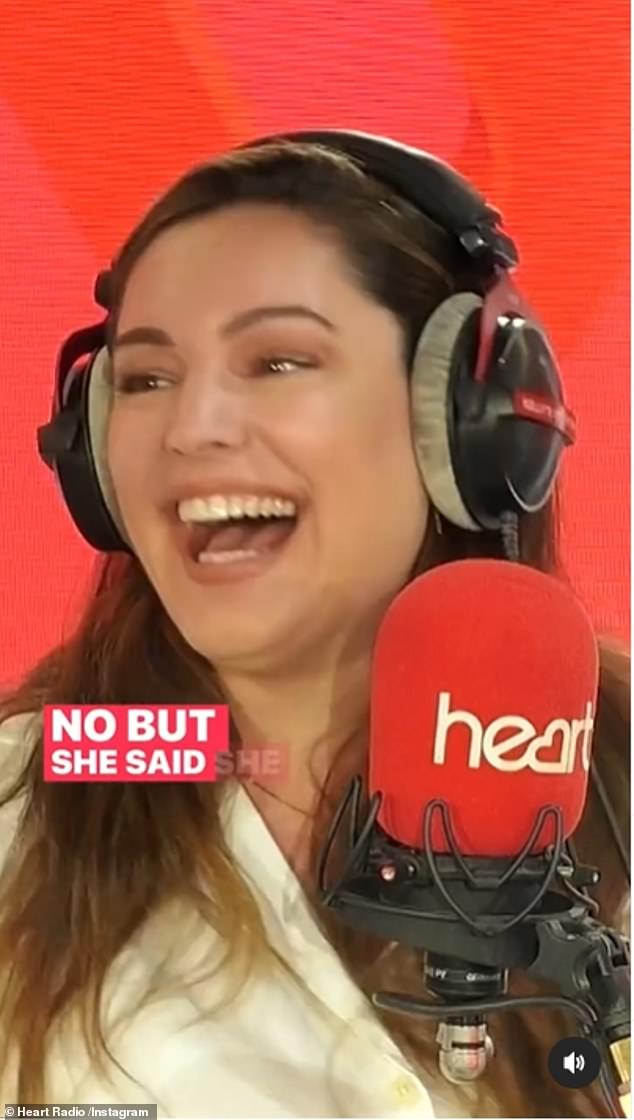 Last-minute change: The presenter, 42, detailed the special day, explaining how a thunderstorm had almost derailed the celebrations

Kelly laughed and joked: ‘Mind you when it did start raining I said that’s all my ex-boyfriend’s tears coming down. It’s inevitable, they’re all crying out there.’

Jason asked: ‘How was it walking down the aisle?’

To which Kelly replied: ‘I don’t know babe. I never got to walk down the aisle!’

Detailing the day’s events she said: ‘So I don’t know if you know but we need have a real big thunderstorm right before my ceremony started and it turned out that I didn’t end up getting married where I thought we’re going to get married, which was this beautiful aisle and this lovely altar that was all built. 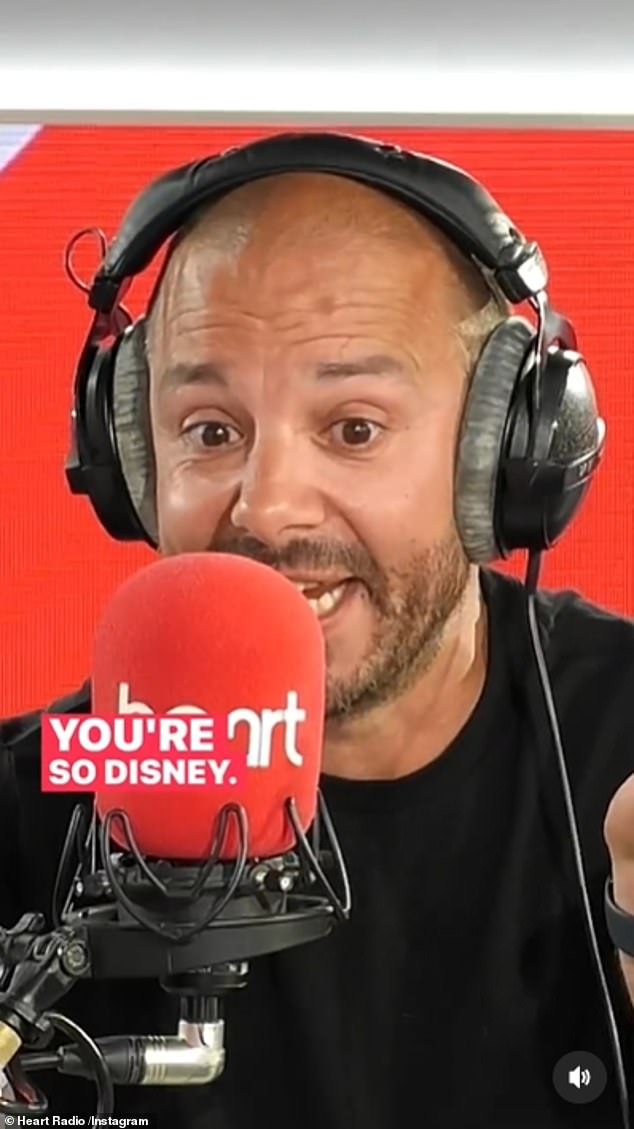 Staying positive, she went on: ‘I had to climb the tower in pouring rain to marry my Prince Charming. It was absolutely wild but so much fun and I wouldn’t change it for the world.’

She quipped: ‘It wasn’t on the Pinterest board, but it happened.’ 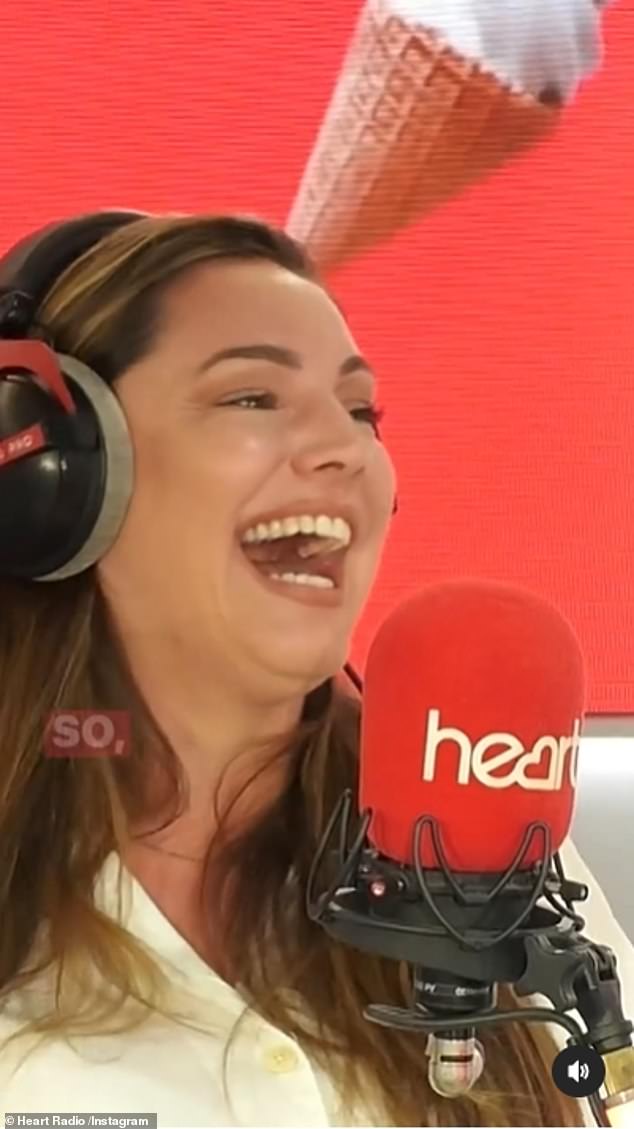 Poking fun: Kelly laughed and joked: ‘Mind you when it did start raining I said that’s all my ex-boyfriend’s tears coming down. It’s inevitable, they’re all crying out there’

The bride exchanged vows with Parisi in Italian port town Civitavecchia, a popular holiday destination famed for its historic architecture.

She was seen holding its floor-length hemline away from the rough terrain surrounding Torre di Cicero – the 19th century villa that served as their wedding venue.

Her long brunette locks were styled in soft waves and she let them cascade down her shoulders, and added a delicate tiara and veil on top of her head. 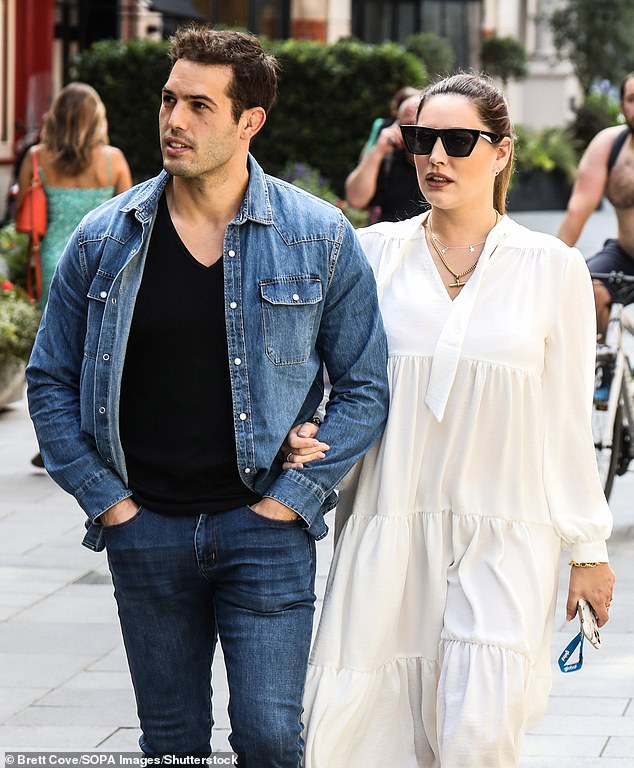 Staying positive: She went on: ‘I had to climb the tower in pouring rain to marry my Prince Charming (pictured with Jeremy in JuLy 2020)

Jeremy cut a very handsome figure, as he held hands with his bride, in a black tailored three-piece suit, and tie with a flower pinned to his lapel.

It’s understood that Kelly pulled out all the stops for the day, with the bride-to-be paying for funfair rides and inviting A-list guest Kylie Minogue, according to The Sun.

The publication reported that the former Big Breakfast host has thrown ‘the kitchen sink’ at her wedding to give her and Jeremy the day to remember, with the plans turning into an ‘extravagant affair’.

A source told The Sun: ‘Kelly has thrown the kitchen sink at her wedding and it’s turning into quite an extravagant affair. She has booked the Villa Nota Pisani in central Italy for the ceremony and reception.

The insider added that the villa is a ‘beautiful location’ and the couple ‘fell in love with it’ immediately after setting eyes on it.

They went on: ‘Kelly has invited all her friends and stars like Kylie are on the guestlist. The ceremony is going to be really romantic but Kelly wants to give her family and pals a real party afterwards. She has been in talks with a company to put on a funfair for everyone — and the drinks will be flowing all night.

After earning her fortune following a successful 25 year career as a model, actress and media personality, it appears there was no expense spared when it came to making Kelly’s wedding dream come true.

The source added: ‘Kelly knows Jeremy is her soulmate and this is going to be her only wedding so she’s going all out. All in it is looking to cost her between £300,000 and £500,000 — but to her it is money well spent.

The insider continued to say that it is ‘Kelly’s dream wedding’ and that ‘everything she ever wanted’ is now ‘becoming a reality.’

A look back at Kelly Brook’s fiancés

He is now engaged to Rosie Huntington-Whiteley and the pair share two children. 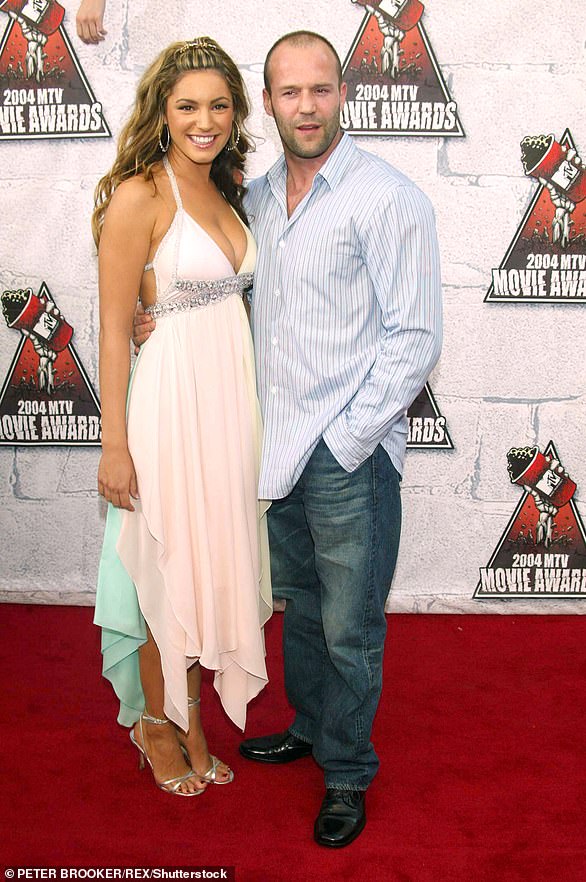 After splitting from Jason, the model moved on with American actor Billy, now 56.

They met on the set of Survival Island (2005), also known as Three.

The pair called it time on their relationship in 2008.

He is currently engaged to the mother of his two children, Candice Neil. 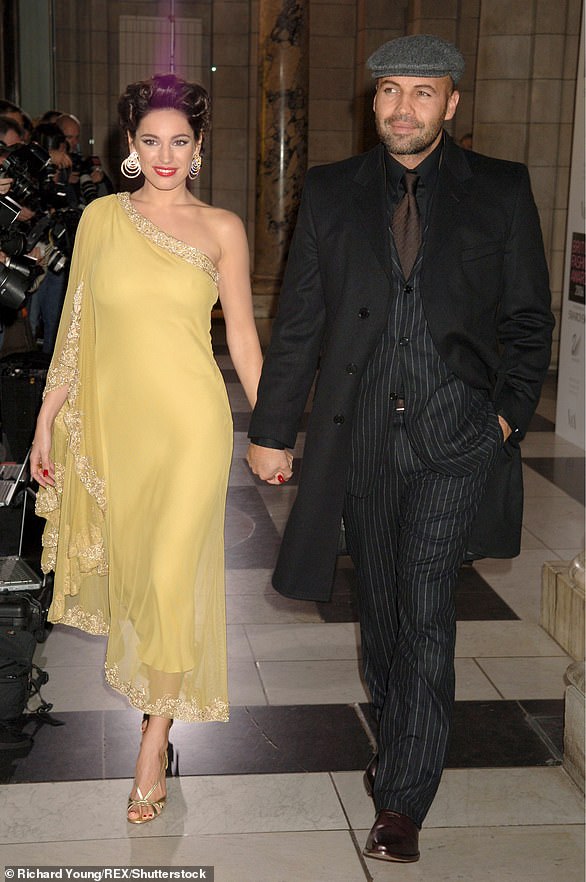 Number two: After splitting from Jason, the model moved on with American actor Billy Zane, now 56. They split in 2008 (pictured 2006)

The pair sadly suffered two miscarriages during their time together. 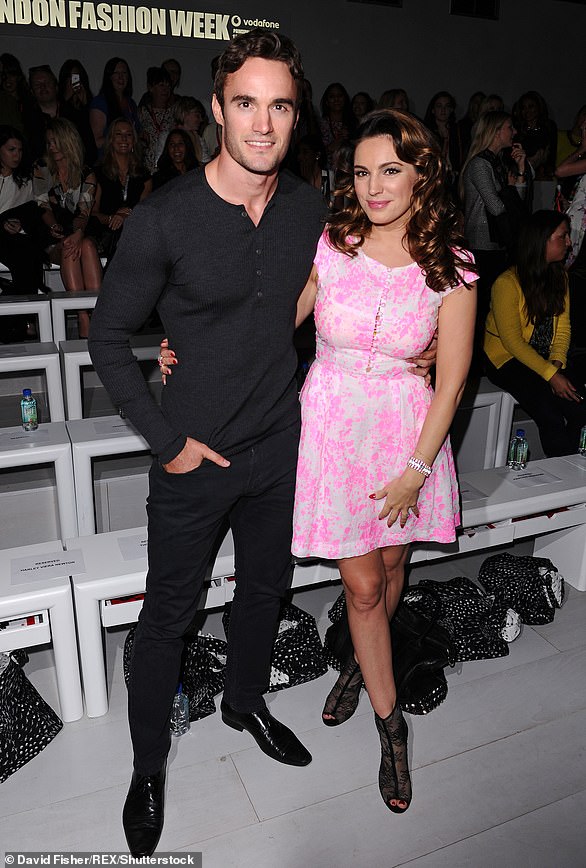 Gladiator competitor David, now 36, and Kelly were together for less than a year before they split in January 2015. 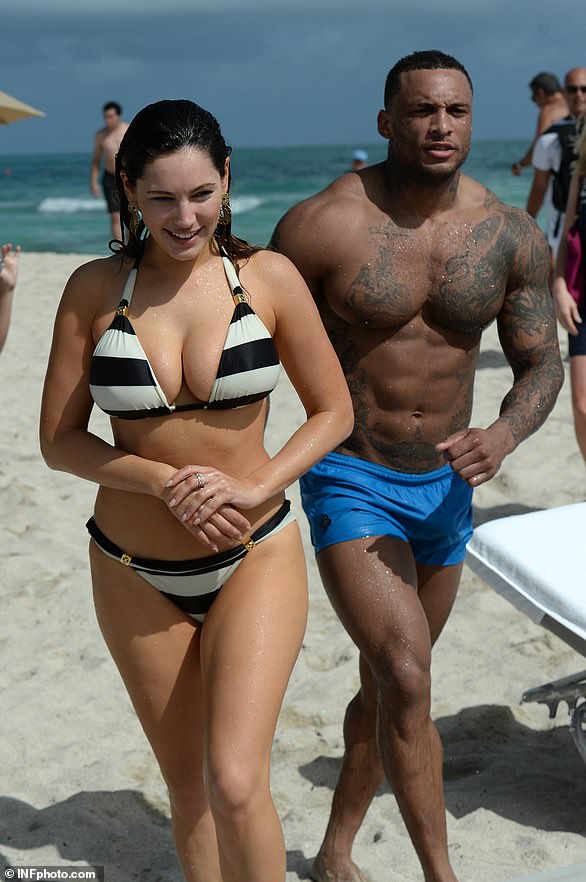 Number four: Gladiator competitor David McIntosh, now 36, and Kelly were together for less than a year before they split in January 2015 (pictured 2014)