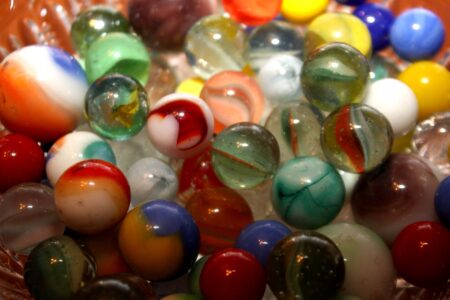 Photo Provided – The simple beauty of marbles holds the interest of both kids and collectors.

Even though today’s children are overloaded with toys and activities, marbles still fascinate youngsters — at least as far as my grandsons go.

Just last weekend when I needed a marble for an old-time game where you tilt the board and race the marbles, my 5-year-old grandson, Angelo, was delighted to see the big dish of pretty marbles that I brought out of the china closet.

It seems marbles remain treasured by little boys today. And why not? Vintage and antique versions of these pretty little glass globes are sought after and saved by marble collectors of all ages, all over the world.

Undoubtedly the best-known name in marbles around here is Marble King, a West Virginia company with a history that goes all the way back to the heyday of Mountain State glass in the 1930s.

According to the company website, Berry Pink and Sellers Peltier founded Marble King in 1949 after the two marble pioneers worked for a decade or more producing and pushing marbles to the public.

Pink was a successful businessman and loved to interact with children. Peltier Glass manufactured the marbles in the 1930s and early 1940s, and by the late 1940s Pink was selling more marbles than Peltier could produce.

The two marble men joined forces and formed another manufacturing facility in which Pink held the majority of shares.

Berry Pink traveled throughout the country hosting marble tournaments and giving away several marbles at each stop. He became known as “The Marble King,” and that’s how the company got its name. It was officially founded in December 1949.

The distinctive logo shows a red and black marble with a crown on its animated head. Marble

King was originally located in St. Marys, W.Va., but after a 1958 fire destroyed the factory, then manager, Roger Howdyshell, moved the company to Paden City where it remains today.

Howdyshell was an innovative man who left his mark on the marble industry in lots of ways. He led Marble King to the forefront when he manufactured the first American made Cat’s Eye marbles.

He also developed a process called “veneering” marbles. In this process, you could use less expensive glass as base glass and put a thin coating on the exterior surface to give the marble color.

In 1983, Roger Howdyshell bought Marble King. He had dedicated his life to the industry and truly loved it, according to the website, and he continued to operate the facility until his death in 1991. Today, Marble King continues to be owned and operated by the Howdyshell family.

I’ve always loved marbles and shared the pride of all West Virginians who know the history of Marble King. Marble King products are shipped to Mexico, Canada and other international sites.

The marble gems are very popular and are used in many ways, like floral arrangements, wedding decorations and home decor. Gems look like marbles that are smashed and flattened and come in many colors!

Collector marbles are valuable and antique ones (prior to mass manufactured versions) display a pontil mark of where the glass was cut off the glass blower’s tool. But keep in mind that there are many lesser quality marbles made since the 1980s in China or Mexico that aren’t valuable at all.

For avid collectors, there is plenty to study about this hobby that got started when playing a game of marbles was comparable to kids playing video games today. Marble collecting has been going on for generations and it offers a fascinating and fun collectible that is small enough to enjoy without space issues.

Visit marblecollecting.com for details and advice on how to grade and ID marbles.

Today’s breaking news and more in your inbox